skip to main | skip to sidebar

Winter in the Boston area last year set new records for cold and snowfall. Over 110 inches of snow fell in Boston. And in the nearby suburbs, the amount of snow that piled up likely exceeded even that total.

When I was just a lad some 60 years ago, I remember a number of major snow storms coming one right after the other. Snow sometimes piled up to the window sill of our house. In corners of the yard, the wind created drifts that were taller than me. Such a bounty of snow created a winter playground for kids like me. There were forts to be built and tunnels that could be dug through the drifts. Yet even these wonderful white storms of the past paled in comparison to those of last year's winter.

My wife and I had wisely decided to visit her family in Malaysia in the fall of 2014. As our day of returning to Boston approached in January, our son recommended that if we could, we should postpone our return until most of the winter had passed because of the record snowfall. While we agreed that there was no reason to rush back to Boston, I had a hard time believing that the amount of snow was as serious as our son described. So he sent me a picture of our favorite roadside ice cream stand to give us a clearer picture of what we would face if we returned. 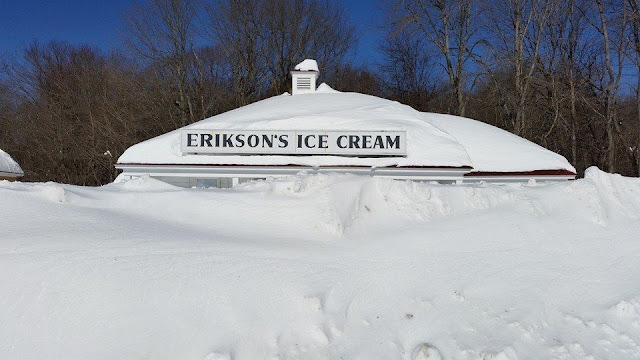 This one picture made clear that not only was snow up to the window sills, it even climbed up to rooftop level! While I've never shied away from shoveling out my walk and driveway, we agreed that over 7 feet of snow should be left for the skiers rather than the shovelers.

This is one winter that I was glad to have missed.

Traveler
Massachusetts, United States
Growing up in a small Massachusetts mill town, I dreamed about traveling to far away places but never thought I would ever really journey to such distant destinations. Through my Peace Corps service in Malaysia, however, I began to find myself at home in many parts of the world. Over the years, my career in humanitarian assistance has brought me to many corners of our globe that few tourists see. I created this blog to share memories from many of the places I have been.

All text and photographs ©Frank Catania

"Do not follow where the path may lead. Go instead where there is no path and leave a trail."
Ralph Waldo Emerson