skip to main | skip to sidebar

Over the years I’ve often traveled to Singapore. My first visit was in late 1970 when I was serving as a Peace Corps Volunteer in Malaysia. At that time, Singapore had only been independent for five years. There was still something of a colonial atmosphere about the place. In part it was the architecture and in part it was the presence of longtime expats at the old pubs and other British hangouts. The pace of life was definitely slower then as there was no reason to hurry and air conditioning was far from universal.

While Orchard and Tanglin Roads had already become the main destination of foreign visitors, there were relatively few tourists. Most visitors were businessmen looking for an opportunity in Singapore’s newly independent economy. Unlike today, there were no broad walkways and megamalls in this part of town. As pedestrians ambled along the crowded sidewalks, they had to edge past snake charmers and other touts trying to cage a few tourist dollars. During the monsoon season, Orchard Road regularly flooded and visitors moved between the hotels and shops in trishaws pushed by men walking through the water. Most of the city at that time consisted of two story shophouses. The few skyscrapers that existed were found along Shenton Way.

The heart of the old city, around the intersection of Temple and Trengganu, was still an area where a visitor felt alien. This traditional Chinatown center remained a world apart. Nearby Sago Lane was still remembered for its houses where the dying were brought. Such traditional death houses had only been banned a decade earlier. The area’s many shops catered to the traditional needs of the local community and not to tourists seeking Singapore kitsch. For a visitor interested in exploring the crowded markets along Singapore's back streets, an ability to speak Hokkien or Malay was more useful than English or even Mandarin.

In the years immediately following independence, an important link with Singapore’s past remained an economy driven by shipping and trade, dominated by a few old established firms. Ships, anchored in the roads just off the coast, could be seen offloading their cargo into lighters tied up alongside. As soon as one lighter would fill, another would take its place. 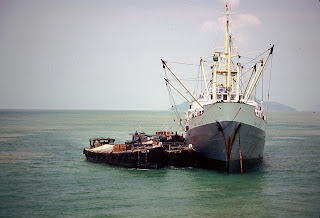 Lighters not only had a strong engine below deck but also had eyes painted on their bow to guide them as they chugged their way from the outer harbor past the Merlion to godowns lining the Singapore River. There was a constant procession of lighters entering and leaving the river's boat basin. Along Boat Quay, lighters could be seen three and four deep as they jockied for a berth. Night and day, coolies unloaded everything that Singapore traded. Whether the cargo was precious or common, much of it was carried ashore on the backs of men. With practiced effort they balanced their loads across rickety planks laid from the lighters to the roadway. The shift to containerized shipping was still some years ahead. Today’s diversified economy of electronics production, investment banking and international tourism remained a dream yet to be created by Singapore’s leaders. 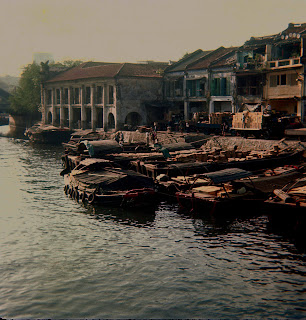 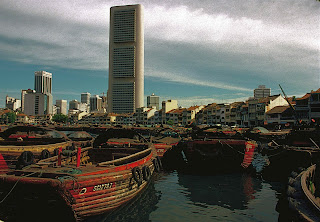 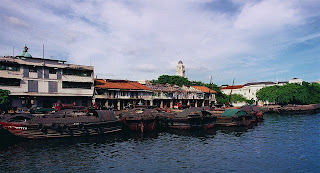 When the sun set, Singapore was transformed as the city’s car parks became impromptu dining emporiums with dozens of hawkers setting up their push carts to prepare an amazing variety of local food favorites. Whether you were looking for satay, mee goreng, murtabah or even more elaborate dishes, there were many choices. For expats and local elites wanting to enjoy typically British fare, dinner at the Raffles Hotel promised an atmosphere of raffish charm along with its signature cocktail, the Singapore Sling. Many visitors and expats completed their evening by wandering over to Bugis Street to gawk at the nightly parade of transvestites known for their remarkable beauty. The opportunity of sharing a drink, a dance or something more with one of these "girls" made Bugis Street one of Singapore’s more notorious nightspots.

Singapore today is as shiny and up-to-date as the brightest capitals of Europe and North America. Singapore’s growing economy has brought prosperity to its population. The country’s education and healthcare systems are second to none. Crime is low. Employment is high. On Singapore’s Metro you can move comfortably and swiftly to almost any destination in the city. New construction continually updates Singapore’s skyline. To best London, Singapore now has its own giant ferris wheel, the Singapore Flyer—the world’s tallest at 165 meters. 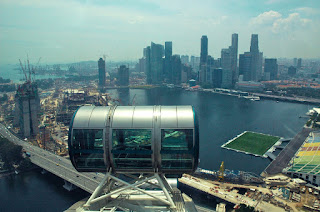 From Benetton to KFC, from Starbucks to Versace, international logos are highly visible throughout the city. And yet, in this rush to a future closely intertwined with other world capitals, a sense of Singapore’s unique and storied history is vanishing as the country reinvents itself for the modern world.

Images from the past remain and yet they’re different somehow. You can, for example, still spend a pleasant, if expensive, afternoon over drinks in the Raffles Long Bar. But with the Raffles transformation into an international tropical resort a decade ago, a great deal of its earlier charm has been lost along with the polished patina of the old woodwork and fixtures. Bugis Street, once infamous as a licentious entertainment district, has now become the site for yet another shopping mall. And at night along Boat Quay, the waterside is bright with neon as visitors and young Singaporeans while away the evening in restaurants and shops unaware that this area used to be a working river where coolies humped sacks of copra and spices from lighters to godowns. 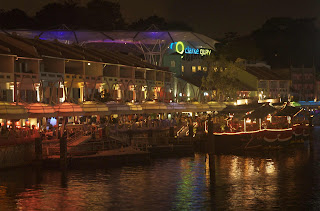 I enjoy the efficient and entertaining city that Singapore has become. I feel at home there. With its modern facilities, Asian hospitality and wonderful Peranakan cuisine, Singapore remains a destination worth traveling halfway around the world to visit. But I also miss the Singapore I have known: comfortably colonial, mysteriously oriental, gritty, tawdry and vibrantly on the cusp of a new age.

When I think of all these changes—not only what has improved but also what has been lost—I take comfort from the wisdom of Buddha who teaches us that all of life is impermanent.
Posted by Traveler on Saturday, March 07, 2009 2 comments:

Traveler
Massachusetts, United States
Growing up in a small Massachusetts mill town, I dreamed about traveling to far away places but never thought I would ever really journey to such distant destinations. Through my Peace Corps service in Malaysia, however, I began to find myself at home in many parts of the world. Over the years, my career in humanitarian assistance has brought me to many corners of our globe that few tourists see. I created this blog to share memories from many of the places I have been.

All text and photographs ©Frank Catania

"Do not follow where the path may lead. Go instead where there is no path and leave a trail."
Ralph Waldo Emerson